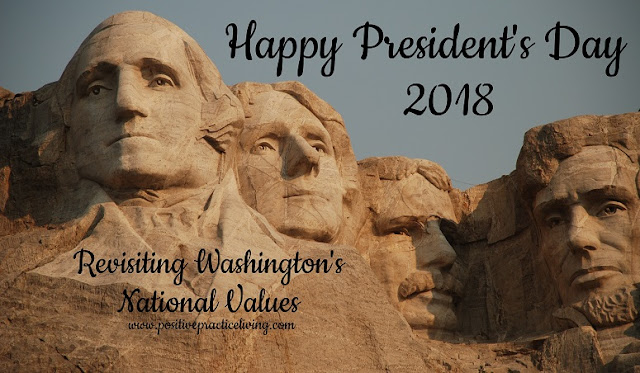 Today is President's Day! And there's a little more to celebrate than just a good sale at Macy's.

President's Day was established in 1879 to honor our founding father and first president, George Washington's, birthday on February 22.

Over time, the holiday came to include 16th president, Abraham Lincoln's birthday, which falls on February 12. Eventually, the observation became a celebration of the current president as well as all of those who came before and the their efforts to serve our nation.

In 1968, Congress passed the Uniform Monday Holiday Act to “provide uniform annual observances of certain legal public holidays on Monday.” The idea was to create 3-day weekends allowing “substantial benefits to both the spiritual and economic life of the Nation.” Now President's Day, or Washington's Birthday, is observed on the third Monday of February.

During this day of reprieve, I offer a reflection of our nation's founding father and first president George Washington. He had the recently founded nation's best interest at heart and served as president with outstanding values. These principles guided our nation's formative years and are worth revisiting as we forge the future.

Washington was a reluctant candidate for the presidency. However, his countrymen had full confidence in his leadership abilities and he was unanimously elected by the electoral college. Washington remains the only president to receive the totality of electoral votes.

Inaugurated on April 30, 1789 on the balcony of Federal Hall in New York City, Washington pledged his loyalty to his nation: “I do solemnly swear that I will faithfully execute the office of President of the United States and will, to the best of my ability, preserve, protect and defend the Constitution of the United States," he added, “so help me God.”

As a previous delegate from Virginia and an American Revolution General, Washington had great experience when it came to leadership, organizing people and being the face of a revolution. He was a skillful strategist and a persuasive speaker.

After being elected, Washington knew that it was up to him to define the precedent for the presidency. He was very aware of this and made many of his decisions with the future of the young nation in mind.

Washington wanted to be addressed as "Mr. President," as opposed to some of the more majestic names proposed by the Senate. He also instated the cabinet form of government and set the traditional function of giving messages to Congress.

He also reluctantly accepted a $25,000 year salary (equal to about $340,000 in 2015), which would allow any person to serve in the office, not only the independently wealthy individuals who could manage without any salary.

Washington set a standard as president for the tolerance of opposing voices. He was an excellent delegate and a good judge of character. He would talk with and listen to guidance from his advisers before making a final decision. Once he made the decision, he had the authority to expect it to be respected from all sides because ultimately he led with reverence to the common good of all. He respected the opinions of those he trusted, but Washington was also very decisive, orderly and energetic. All of these qualities made him a great leader.

After two terms of presidency, Washington refused to serve a third term. This decision set a precedent for our tradition of a maximum two term limit for the office (later enacted into law with the Twenty-second Amendment signed in March of 1947.)

Every year, to commemorate President's Day, the Senate reads out loud George Washington's Farewell Address. This tradition began in 1862 as a morale-boost during the darkest days of the Civil War. Tennessee senator Andrew Johnson introduced the idea to go back to our roots as a nation:

"In view of the perilous condition of the country, I think the time has arrived when we should recur back to the days, the times, and the doings of Washington and the patriots of the Revolution, who founded the government under which we live."

Another hundred and fifty years later, and this opinion is appropriate once again.


Washington’s Farewell Address was issued as a public letter in 1796 and was considered one the most influential statements of republicanism. With help from Alexander Hamilton and James Madison, Washington drafted his "Farewell Address" and delivered it to the people of the United States on September 19, 1796.

Within his farewell address, Washington gave advice on the necessity and importance of national unity, the value of the Constitution and the rule of law and the proper virtues of a republican people. He also encouraged friendship and commerce trade with other nations, but to not get involved in foreign affairs. In the same ethos, he advised against foreign influence in domestic affairs.

Washington was not a member of a political party. In fact, he hoped they would not form. However, he could sense the eventual formation of rival parties while witnessing his cabinet members debate over sharply divided views. These two factions formed by his closest advisers set the framework for the First Party System.

In great wisdom, Washington warned against the evils of political parties:

“There is an opinion that parties in free countries are useful checks upon the administration of the government and serve to keep alive the spirit of liberty. This within certain limits is probably true— and in governments of a monarchical cast patriotism may look with indulgence, if not with favor, upon the spirit of party. But in those of the popular character, in governments purely elective, it is a spirit not to be encouraged. From their natural tendency, it is certain there will always be enough of that spirit for every salutary purpose. And there being constant danger of excess, the effort ought to be, by force of public opinion, to mitigate and assuage it. A fire not to be quenched, it demands a uniform vigilance to prevent its bursting into a flame, lest instead of warming it should consume.” --Washington’s Farewell Address: Sept 19, 1796

George Washington was a strong leader who guided the United States with a great foresight about what our nation needed. As a founding father, war general and first president, his overwhelming reputation impressed the American people. He became a international icon for liberation and nationalist and he was a great exemplar of republicanism.
A country that was very young in Washington's day, has gained much experience and history over the last two hundred years. In respect for President's Day, I offer this look at where our nation began so we can let those foundations guide us as a nation moving forward.
The America we live in now is almost unrecognizable from Washington's day. Not only by the numerous technological advances, foreign and domestic diplomacy, and social policy, but also the values advocated for by our current President.
In light of recent national tragedy, the pressure for United States Gun Law reform is at a high concern for the people. President Trump has little action in regards to this issue. However, Washington states: "The basis of our political systems is the right of the people to make and to alter their constitutions of government."
Washington reminds us as a nation, that times and issues do change over time and we must manage the common concerns of the people. Foreign policy is another area where Trump is sliding further away from Washington's advice to avoid interference by foreign powers in the nation's domestic affairs.
Washington's warning of the dangers of political parties seems to have come to fruition: "It serves always to distract the public councils and enfeeble the public administration. It agitates the community with ill founded jealousies and false alarms, kindles the animosity of one part against another, foments occasionally riot and insurrection. It opens the door to foreign influence and corruption, which find a facilitated access to the government itself through the channels of party passions."
We are witnessing history in these very dynamic years of our nation. Yes, the world is a lot different in our current era. It is hard to guess what kind of leader George Washington would be in today's society. However, many of his cautions have been disregarded and now we are living with the very consequences he foretold.
There is a lot to learn when we go back to the beginning of our nations history and remember why we fought so hard for our independence and our way of life.
President's Day seems like a good time for a reminder of where we come from as we continue to prepare for the future. Perhaps it is time to rethink our values as a nation and decide who we want to be.

Email ThisBlogThis!Share to TwitterShare to FacebookShare to Pinterest
Labels: Holidays