Leap of Faith
by Amanda McCusker 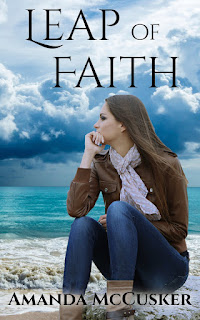 The busy city was an escape from Aria Dalton’s unstable childhood home, but five years later and the soft sands of the Atlantic coast are calling to her. She longs for the peaceful solitude she used find out on the shore, but she dare not return.

Beneath the lights of Las Vegas Aria meets Roman, a man she falls for hard and fast. He's comfortable like she's known him her entire life, and it is no wonder. He lives near her hometown back in South Carolina. Near the life she left behind.

Roman is everything Aria has ever wanted, but can she trust what is happening between them enough to face the past?

Leap of Faith is now available on Amazon as a paperback or ebook.

If you are interested in an autographed copy, check out this page!
at January 08, 2020